Teach a Child to Fish update

I took my 6 year old granddaughter to the lake on Wednesday to introduce her to fishing. I had dug out my old Hardy Fiber Light 8ft spinning rod and found an old Michell reel along with a box containing some floats. Having set the rod up in the car park we walked to the platform close to the trees, having shown her how to cast and after rescuing the float from the tree branches (several times!) we managed to get the float into the water. We tried sweetcorn first with no result so she selected a worm and I set the depth to 3ft. The fish seemed to just be sucking on the worm but after several false strikes (and resulting birds nests!) she finally hooked a fish which was duly netted the fish was about 4Lb not a bad start. Several fish were then lost before she got bored and wanted to try casting a fly – this did not go well but she is keen to try on her lawn so who knows next time she may catch a fish on a fly! 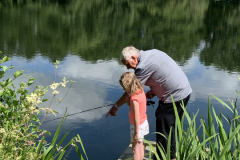 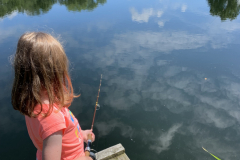 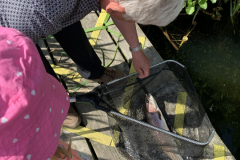 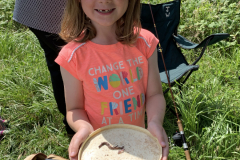