Howards beat – Trouble at the Bubble!

Those who fish Howards Beat will be aware that over the winter following the land slip several trees had slipped into the pool. This had not been helped by the opposite bank cutting trees and letting them fall into the river to become tangled with those which had slipped in and were anchored by their root balls.

Today (3 August) four members, Dave Scutter, Chris White, Mervyn Williams and Alwyn Cartwright manage to remove two of the trees which were causing most of the problems. A big thank you to Alwyn who brought his boat. There is still one tree which is below the ‘bubble’ to be removed but after 8 hours hard work it will have to be left for another day. The photographs below show the work in progress. We should perhaps apologies’ to anyone fishing downstream as pulling the root balls out disturbed a lot of silt and turned the river brown! 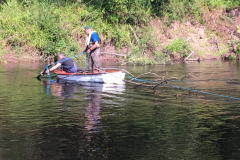 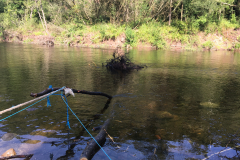 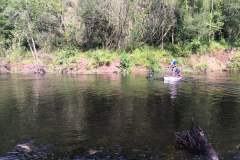